Many notable sports people have experienced  voices and visions, here are some examples (click on the name for more information): 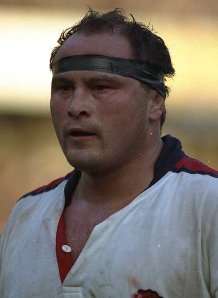 Brian Moore, is a former international rugby player, on the BBC Programme “Desert Island Discs” he talks about his “inner gollum”, hearing voices, the part of me that “will come in and keep him down”, including the time in 1981 when Moore was a key part in the England Rugby team’s victory in the Grand Slam – when he didn’t feel he deserved to be, and did not appear at the celebrations – his inner golum voicing   overpowering self doubts and keeping him away, his experience of child sexual abuse and how that impacted on his life .

Moore was born to single mother Rina Kirk in Birmingham abandoned by his Malaysian father. His mother gave him up for adoption at 7 months old to Methodist lay preachers Ralph (deceased) and Dorothy Moore, who moved to Halifax, West Yorkshire, where he lived in Illingworth and attended the Crossley and Porter School, and he first played rugby union for the Old Crossleyans. Moore’s adoptive parents had two daughters of their own and adopted two children as well as Moore.

In December 2009, Moore revealed to the media that he was sexually abused in a tent during a camping trip and in a classroom storeroom when he was 9 by a male schoolteacher who also abused other boys of the same age. He was too ashamed to tell his adoptive parents as the abuser was a churchgoing friend of theirs. The shame he felt at being a victim made him keep silent about it until he told the Child Exploitation and Online Protection Centre in London in 2008. He said the trauma made him ferociously competitive on the rugby field, and commented “If you have been abused, you feel tainted by association with the awfulness of the crime.”

Vincent Peter “Vinnie” Jones (born 5 January 1965) is an English actor and retired footballer. Born in Hertfordshire, England, Jones represented and captained the Welsh national football team, having qualified via a Welsh grandparent. As a member of the “Crazy Gang”, Jones won the 1988 FA Cup Final with Wimbledon, a club for which he played well over 200 games during two spells between 1986 and 1998. He also previously played for Chelsea and Leeds United.

He has capitalised on his tough man image as a footballer and is known as an actor for his aggressive style and intimidating demeanour, often being typecast into roles as coaches, hooligans and violent criminals.

“I had a brilliant childhood though, until my mum and dad divorced, when I was 13. That changed my life because it was like one of your parents dying. My mum went to work in a nursing home – she moved in there and I stayed with my dad. Divorce makes you rebel – it gives you insecurities and a licence to do what you want, because your mum and dad are always playing a game with you.”

Jones says his biggest role model was his grandfather. He is convinced that Arthur Jones, a decorator who died in 1977, has continued to offer guidance from ‘the other side’.

‘I talk to him all time,’ he says. ‘So many spooky things have happened over the years. When I was a groundsman I would talk to my grandad all day long and say, “Just give me one chance to play in the fourth division, anything. Four years later, I won the FA Cup.’

Joshua Slocum (February 20, 1844 – on or shortly after November 14, 1909) was the first man to sail single-handedly around the world. He was a Nova Scotian born, naturalised American seaman and adventurer, and a noted writer. In 1900 he wrote a book about his journey Sailing Alone Around the World, which became an international best-seller. He disappeared in November 1909 while aboard his boat, the Spray.

He claimed to have been aided by the ghost of Christopher Columbus’s helmsman, who guided him safely through storms and bouts of illness.

I went below, and threw myself upon the cabin floor in great pain. How long I lay there I could not tell, for I became delirious. When I came to, as I thought, from my swoon, I realized that the sloop was plunging into a heavy sea, and looking out of the companionway, to my amazement I saw a tall man at the helm. His rigid hand, grasping the spokes of the wheel, held them as in a vice. One may imagine my astonishment. His rig was that of a foreign sailor, and the large red cap he wore was cockbilled over his left ear, and all was set off with shaggy black whiskers. He would have been taken for a pirate in any part of the world. While I gazed upon his threatening aspect I forgot the storm, and wondered if he had come to cut my throat. This he seemed to divine. “Señor,” said he, doffing his cap, “I have come to do you no harm.” And a smile, the faintest in the world, but still a smile, played on his face, which seemed not unkind when he spoke. “I have come to do you no harm. I have sailed free,” he said, “but was never worse than a contrabandista. I am one of Columbus’s crew,” he continued. “I am the pilot of the Pinta come to aid you. Lie quiet, señor captain,” he added, “and I will guide your ship to-night. You have a calentura, but you will be all right to-morrow.” I thought what a very devil he was to carry sail. Again, as if he read my mind, he exclaimed: “Yonder is the Pinta ahead; we must overtake her. Give her sail; give her sail! Vale, vale, muy vale!” Biting off a large quid of black twist, he said: “You did wrong, captain, to mix cheese with plums. White cheese is never safe unless you know whence it comes. Quien sabe, it may have been from leche de Capra and becoming capricious –”

“Avast, there!” I cried. “I have no mind for moralizing.”

I made shift to spread a mattress and lie on that instead of the hard floor, my eyes all the while fastened on my strange guest, who, remarking again that I would have “only pains and calentura,” chuckled as he chanted a wild song:

High are the waves, fierce, gleaming,
High is the tempest roar!
High the sea-bird screaming!
High the Azore!
I suppose I was now on the mend, for I was peevish, and complained: “I detest your jingle. Your Azore should be at roost, and would have been were it a respectable bird !” I begged he would tie a rope-yarn on the rest of the song, if there was any more of it. I was still in agony. Great seas were boarding the Spray but in my fevered brain I thought they were boats falling on deck, that careless draymen were throwing from wagons on the pier to which I imagined the Spray was now moored, and without fenders to breast her off. “You’ll smash your boats!” I called out again and again, as the seas crashed on the cabin over my head. “You’ll smash your boats, but you can’t hurt the Spray. She is strong !” I cried.

I found, when my pains and calentura had gone, that the deck, now as white as a shark’s tooth from seas washing over it, had been swept of everything movable. To my astonishment, I saw now at broad day that the Spray was still heading as I had left her, and was going like a race-horse. Columbus himself could not have held her more exactly on her course. The sloop had made ninety miles in the night through a rough sea. I felt grateful to the old pilot, but I marvelled some that he had not taken in the jib. The gale was moderating, and by noon the sun was shining. A meridian altitude and the distance on the patent log, which I always kept towing, told me that she had made a true course throughout the twenty-four hours. I was getting much better now, but was very weak, and did not turn out reefs that day or the night following, although the wind fell light; but I just put my wet clothes out in the sun when it was shining, and, lying down there myself, fell asleep. Then who should visit me again but my old friend of the night before, this time, of course, in a dream. “You did well last night to take my advice,” said he, “and if you would, I should like to be with you often on the voyage, for the love of adventure alone.” Finishing what he had to say, he again doffed his cap and disappeared as mysteriously as he came, returning, I suppose, to the phantom Pinta. I awoke much refreshed, and with the feeling that I had been in the presence of a friend and a seaman of vast experience. I gathered up my clothes, which by this time were dry, then, by inspiration, I threw overboard all the plums in the vessel.

Zinedine Zidane (born 23 June 1972) is a retired French footballer who is widely regarded as one of the best players of all time. Zidane was the leading figure of a generation of French players that won the 1998 World Cup and 2000 European Championship. After a brief international retirement, he returned to the national team in 2005 and captained France to the 2006 World Cup Final where he won the Golden Ball as the tournament’s most outstanding player.Zinedine Zidane is one of the most famous French footballer ever, he played for Real Madrid and was a key member of the victorious French World Cup team of 1998.

Zinedine Zidane claimed a “mysterious voice” persuaded him to come out of international retirement and join up with the France team for the remainder of their World Cup qualifying campaign.

However, Zidane explained how a curious experience persuaded him to reverse his decision.

“I would not want people to talk too much about it in case what I have to unveil gets badly interpreted, but what is happening to me is quite mystical and gets out of my control”

“This is even irrational and that’s why I am the only person to be able to truly feel it. One night, at 3am, I suddenly woke up and I then spoke with someone. But no-one knows it. Neither my wife nor anyone else. Until I die I will never tell (who that person was), this is just too crazy. This is someone that you will probably never meet.”

“During the hours that followed I was on my own with that person, at home, and I took the decision to come back. I had never experienced that before, I felt pushed by this force which dictated my behaviour. It was a revelation for me, I had to obey that voice that was advising me.”

One response to “Sports People”

INTERVOICE Around The World

By continuing to use the site, you agree to the use of cookies. more information

This website uses cookies to improve your experience. We'll assume you're ok with this, but you can opt-out if you wish.